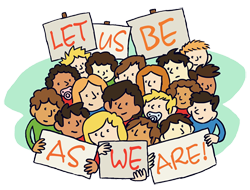 Central rally with speeches:
12:00 noon - Alter Markt next to the Old Town Hall

This will be the eleventh anniversary of the "Cologne Ruling". In 2012, for the first time, a court explicitly granted boys the right to genital self-determination by concluding that medically unnecessary foreskin removal ("circumcision") from a boy is an offense. This decision has since become a worldwide beacon for the self-determination of children regardless of gender, ancestry or religion.

This year's main focus: GENITAL AUTONOMY in art!
In film, literature, theatre, painting and sculpture, genital autonomy has long been and increasingly an issue. Especially the perspectives of the persons concerned are reflected here. Art and its forms of expression expand the space of discourse by promoting human rights, empathy and self-determination in this realm as well.

The "Worldwide Day of Genital Autonomy" calls for:

- Adherence to and implementation of the UN-Convention on the Rights of the Child, Article 2 (protection against discrimination); Article 3 (precedence of children's well-being); and Article 24 Paragraph 3 (abolishment of traditional practices prejudicial to the health of children).

- Legislative initiatives worldwide that provide for the protection of all children, regardless of gender, from non-therapeutic genital operations.

- Protection of children with atypical sex characteristics from genital surgery and intervention without absolute medical indication.

- An immediate stop to group or mass circumcision of minor males (boys) for alleged HIV prevention in African countries.

- Public research and education on the consequences of non-therapeutic genital surgery on children in its different forms and social contexts.

Numerous artists around the world are working on the issue of female genital mutilation. A highlight was the musical version of Waris Dirie's book "Desert Flower" at the St. Gallen Theatre in 2020. The exhibition "100 Cuts" by the Berlin artist Clemens Krauss as part of the Gallery Weekend Berlin 2019 protested with a hundred oil paintings of vulvas and penises against forced genital interventions for cultural or religious motives. In the animated film "Hermes and Aphrodite", Gregor Zootzky (Cologne) tells the story of the intersex child Sascha, who wants to be accepted as it is - and learns that it is not alone in this. The play "Der Goldene Schnitt" by Tuğsal Moğul at the Dortmund Theatre in 2016 dealt with the doubts of a couple about their decision to have their son's foreskin cut off. The father increasingly remembers his own experiences. In the area of short films, Shay Silberman's "Shalem" (Israel) and Mohammad Badr's "Le ciel est de la même couleur ici" (Afghanistan) are impressive examples from the perspectives of those affected.

When will girls finally be protected?

According to the WHO, female genital mutilation refers to all practices in which the outer genitalia are partly or completely removed, as well as to all other injuries to the female genitalia that are not medically indicated. Depending on the motives and category of cutting, the intervention leads to medical, psychological, social and economic consequences. The practice is, in every form, internationally recognized as a serious human rights violation and is still practiced worldwide: in 29 countries in Sub-Saharan Africa, as well as in South, Southeast and Central Asia, as well as in Europe, the US and Canada. Particularly in Asia, the number of surgeries done by medical staff are increasing, leading to repeated calls for legal acquiescence - which clearly contradicts the WHO.

Boys own their own genitals, too

The trivializing term “circumcision” stands for the amputation of the foreskin of the penis, which involves the loss of approximately 50% of the entire penile skin - including the parts most sensitive to sexual stimulation - and irreversibly alters the natural physiology of the penis and its appearance. Possible psychological long-term effects are increasingly being documented. Total foreskin removal is medically avoidable except in very rare cases. A snug or non-retractile foreskin does not constitute a medical condition in children and adolescents if the boy has no painful obstruction, which is a rare condition. Usually, the opening becomes wider by the end of puberty. In instances of an actual medical condition, most cases can be treated non-invasively.

One or two out of every 1000 children are born with "atypical" sexual characteristics. Time and again this has led to early genital operations to “assign” a gender, and to hormonal treatments before the capacity to consent. The affected persons often report feeling altered and resentful that their input was never sought out about their own sex. All German paediatric associations currently recommend delaying those measures to an age where the person affected is able to give informed consent.  At the international level, as well, the technical discussion is moving in this direction. However, physical integrity and self-determination must still be integrated into practice in many places. For 20 years, the people affected have been publicly protesting these surgeries, which they describe in terms of fundamental human rights violations, as being traumatising and as destructive to sexual sensation. These are allegations that are also backed by human rights committees like the United Nations Committee on the Rights of the Child (UN CRC).

Trans* people often want to match their physical characteristics to their true gender by surgery. If a vulva is to be formed from a penis without the foreskin, ideal tissue is missing to a considerable extent.

There is no room for hatred and misanthropy!
We urge all participants to clearly distance themselves from generalizations and animosity and to be absolutely clear that this is solely about the well-being, bodily integrity, and right to self-determination of children.

Our info-page can be found HERE. It contains onward links to specific literature from Germany, Turkey, the USA and other countries; case histories of affected people; films; educational books and brochures; and videos from speeches by international scientists.